The following report on the impact of sleep on academic performance has been compiled by Year 11 Research Project student Abby Laube:

“How essential is sleep for students and how does a lack of it affect academic performance?”

Everyone knows how it feels to be tired or “dazed” the morning after a poor night’s sleep. Students are commonly affected by having a consistent lack of sleep and this is more dangerous than what we think. The lack of sleep has an immense impact on our body’s physical and mental health. Sleep is especially essential for teenager students studying in the most important years of their childhood. Parents have also expressed their concern when their children attend school feeling drained as it is showing a lack of effort through to their schooling results. 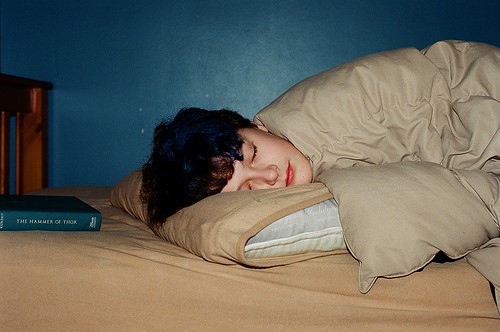 What is the function of sleep?

Forming a regular sleep pattern is very important to the function of the brain. It has been proven that getting the recommended amount of sleep for your age can improve memory immensely. This process occurs when we are asleep because our thoughts are being processed from short term to long term memory so that they can be successfully retrieved for when we require them. Sleep can therefore benefit us with simple daily tasks by increasing attention and, improving creativity and positive decision-making which are vital for strong academic performance. (Why sleep is important, 2018)

The reason sleep is a critical part of everyday performance and mental health has been put down to a substance within the brain called dopamine. Dopamine is found inside the brain, it is a chemical messenger (neurotransmitter) that influences learning, attention, emotion and movement. Neurotransmitters are only as good as their receptors. According to studies; one of the dopamine receptors ability to bind is lower in sleep deprived people this could explain changes in behaviour such as inattention, risk taking and impulsive behaviours.

How much do we need?

The amount of sleep recommended to students from ages 14 to 18 needs cannot be narrowed down to a specific number of hours for every student. The way to determine an individual’s sleep needs usually depends on the lifestyle that they live, what they eat and how old they are. Although there is not one definite answer for the amount of sleep that is needed for teenage students, scientists have narrowed the number down to approximately 9 hours sleep for a well-functioning brain (Spencer, 2016). The results of the survey I conducted reveals that 59.26% of the participants agreed they usually achieve less than 8 hours sleep per night. This is of concern as the average person aged between 14 – 65 years old should be achieving between 6 to 10 hours of sleep. Although this number range is broad, Professor Sally Ferguson from University of Adelaide said that the amount of sleep should be between 8 to 10 hours of sleep for the brain to function at its finest (Ferguson, 2018). When we achieve this recommended amount it helps to improve our long term memory and also have a better attitude towards learning. Most teenagers will agree with the popular quote by Wilson Mizene that states that “the amount of sleep required by the average person is five minutes more”. (WebMD, 2018)

Why is this amount recommended?

Sleep is a critical part of our everyday lives and getting the perfect amount can be more difficult than people first think (apa.org, 2018).  When considering how much sleep is recommended for students, it is vital to take into account the factors of the each individual’s lives. Substances that can negatively affect an individual’s quality of sleep include: caffeine, alcohol and nicotine.  However, research shows that stress is the most common factor that negatively affects the quality and quantity of sleep (Betterhealth.vic.gov.au, 2018). The survey results demonstrate that students who are affected by stress have trouble getting to sleep and also find it difficult to get the best quality of sleep. In fact 62% of students feel like the quality or quantity of their time asleep is affected by the stress that they are experiencing.

Additionally, 56.86% of the survey respondents felt like they were not receiving enough sleep during the night and considering that 59.26 % of the survey participants said that they are getting less than 8 hours of sleep per night, this is unsurprising.  Without receiving enough sleep our bodies cannot feel fully energised and alert throughout the entire day. (Laube, 2018)

What happens when we don’t get enough?

The simplest way to explain why we need sleep is to avoid feeling sleepy (SleepRate, 2013). Studies conducted by an American researcher had asked a group of mentally healthy people were asked to stay awake for one to two days without any sleep to test how they would react after the experiment. The results showed that after a period of time the participants began feeling side effects such as short episodes of extreme tiredness, commonly known as a micro sleep. (Spencer, 2006) The participants also experienced a decline in cognitive performance, changes in hormone levels, weight gain and distributing their negative impacts the learning and memory of teenage students. In extreme cases sleep deprivation can also be connected to a shorter lifespan and can impact learning and memory.

When our brain becomes sleep deprived, several mental changes can occur.  These changes can have effects on the activity and function of the brain. People who are sleep deprived and who have not obtained an adequate amount of sleep may experience difficulty making controlling emotions due to a consistent lack of sleep therefore building up a sleep dept. Sleep deprivation can also be closely associated with severe cases of depression which can further be related to suicide and risk-taking behaviour. (Smith, 2018) “When you find depression, even when you find anxiety, when you scratch the surface 80 to 90% of the time you find a sleep problem as well.”  Explains Brad Wolgast, a psychologist from the University of Delaware USA.

An extreme example of the effects of a lack of sleep was recorded in 1959 when Peter Tripp, a DJ from New York spent a total of 201 hours (8.3 days) without sleep. The mental effects that the “walkathon” had on Peter’s brain were far worse than anyone expected. On the third day without sleep Peter expression highly aggravated and he had begun cursing towards some of his closest friends. By the seventh day he was recorded to have started hallucinating and showing symptoms of paranoia. (Tamminen, 2016)  The long term effects of his 201 hours without sleep did not only change his personally but that also had a negative effect on his relationship with his wife resulted in their separation and also the loss of his career in radio. (Psychologistworld.com, 2018)

The students who took part in completing the survey were asked which of the symptoms they experienced the following day after a lack of sleep. The most common answer this question was chosen was headaches. This is showing that when students are tired they are not only having trouble concentrating but they are also becoming unwell. Another common consequence of sleep deprivation was slowed reaction time. Although this is not the most important skill to have inside the class it could be vital to some of the subjects such as Physical Education or any other type of outdoor classes. Surprisingly, the symptom that was the least common amongst the students was memory loss which is a common symptom that has been discovered and proven by researchers. 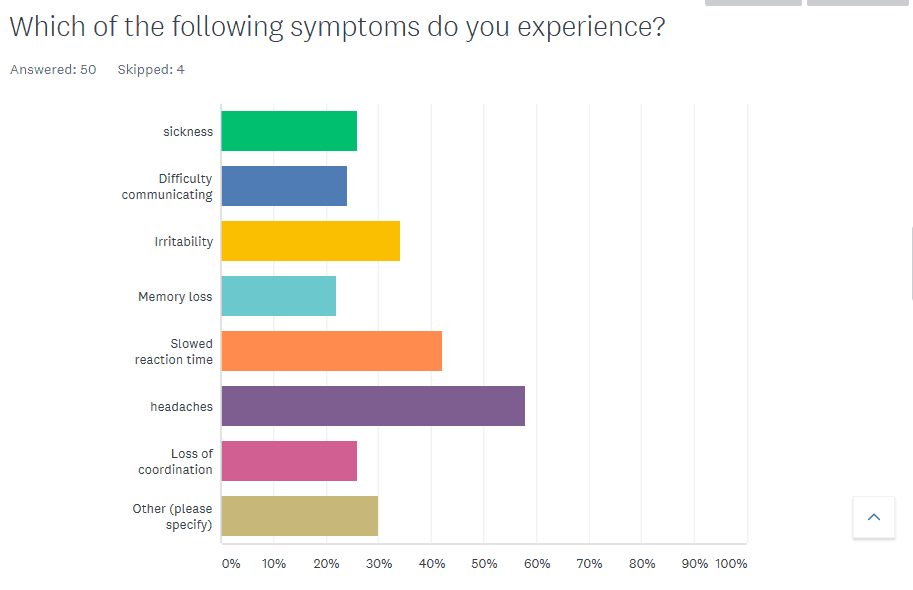 In regards to students there are many areas of their academic performance that can be affected by a constant lack of sleep. As the results of my survey have shown, the majority of participants feel like they are constantly struggling to concentrate during classes and have difficulty remembering what they had learnt the following day. The most common lesson that the students said that they found it difficult to concentrate in was during their Mathematics classes. This could be because when we are not regularly receiving enough sleep throughout the night our brain can struggle to transfer memories from our short term to long term memory so that we can retrieve them when they are needed. Mathematics is based on learning formulas to apply to different equations and therefore it is subjects that students appeared to have had a difficult time concentration when they are sleep deprived. Other subjects that students find it difficult for similar reasons include English and Science. These subjects both use complex terminology that is difficult to understand when the brain is not functioning at its best. The other subjects that were listed as answers were art and design. These two subjects that are based on creative thinking and usually do not involve as much focus as some of the other subjects such as Mathematics, Science and English. These subjects were listed to determine if it the creative aspect of thinking is affected by sleep deprivation and tiredness. (Laube, 2018)

Students who are attempting to improve their sleep pattern should try switching electronic devices off half an hour before going to sleep, avoiding drinking any caffeine after 12 noon and limit any daytime naps to 30 minutes or less (Clinton.lps.org, 2013). Eliminating any background noise or unnatural light can change the effectiveness of sleep. (Healthysleep.med.harvard.edu, 2018)

When students become sleep deprived and continue to push themselves to study instead of sleeping they are pushing their bodies too far and it can cause lots of long term issues. Extreme sleep deprivation can cause memory loss, irritability and the symptom that was common within the students of Port Lincoln High School being headaches. It has a major affect within their academic performance but also within their everyday lives and being sleep deprived can cause the consequences to effect student achievements for their future goals in life if they are suffering from a constant sleep deprivation during some of the most important years of their lives.